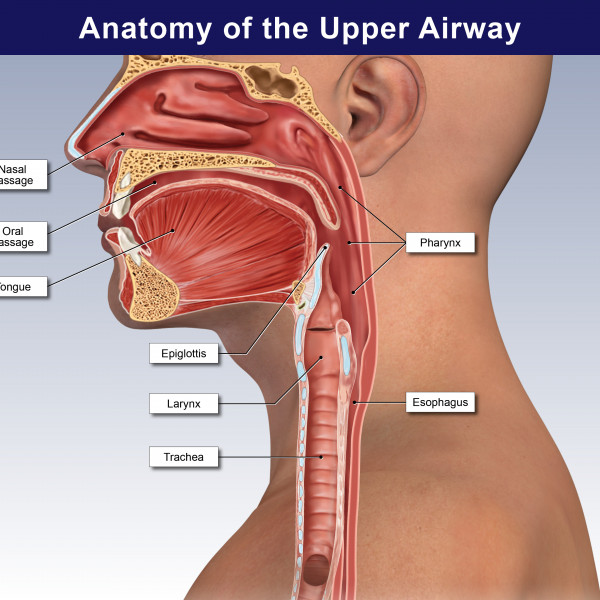 Anatomy of the Upper Airway

The upper airway consists of all anatomic airway structures above the level of the vocal cords. These include the nose, mouth, jaw, oral cavity, pharynx, and larynx. Its major functions are to warm, filter, and humidify air as it enters the body through the nose and mouth. The pharynx (throat) is a muscular tube that extends from the nose and mouth to the level of the esophagus and trachea. The pharynx is composed of the nasopharynx, oropharynx, and the laryngopharynx (also called the hypopharynx). The laryngopharynx is the lowest portion of the pharynx. At the base, it splits into two lumens, the larynx anteriorly and the esophagus posteriorly.

Nasopharynx: During inhalation, air typically enters the body through the nose and passes into the nasopharynx. The nasopharynx is lined with a ciliated mucous membrane that keeps contaminants such as dust and other small particles out of the respiratory tract. In addition, the mucous membrane warms and humidifies air as it enters the body.
Oropharynx: The oropharynx forms the posterior portion of the oral cavity, which is bordered superiorly by the hard and soft palates, laterally by the cheeks, and inferiorly by the tongue. Superior to the larynx, the epiglottis helps separate the digestive system from the respiratory system. Its function is to prevent food and liquid from entering the larynx during swallowing. When swallowing occurs, the larynx is elevated and the epiglottis folds over the glottis to prevent aspiration of contents into the trachea.
Larynx: The larynx is a complex structure formed by many independent cartilaginous structures. It marks where the upper airway ends and the lower airway begins.
The thyroid cartilage is a shield-shaped structure formed by two plates that join in a V shape anteriorly to form the laryngeal prominence known as the Adam’s apple. The cricoid cartilage, or cricoid ring, lies inferiorly to the thyroid cartilage; it forms the lowest portion of the larynx. The cricoid cartilage is the first ring of the trachea and the only lower airway structure that forms a complete ring. The cricothyroid membrane is the elastic tissue that connects the thyroid cartilage superiorly to the cricoid ring inferiorly. The glottis, also called the glottic opening, is the space between the vocal cords and the narrowest portion of the adult’s airway. The lateral borders of the glottis are the vocal cords. These white bands of thin muscle tissue are partially separated at rest and serve as the primary center for speech production. In addition, the vocal cords contain defense reflexes that protect the lower airway, causing a spasmodic closure to the lower airway to prevent substances from entering the trachea (eg, water, vomitus).